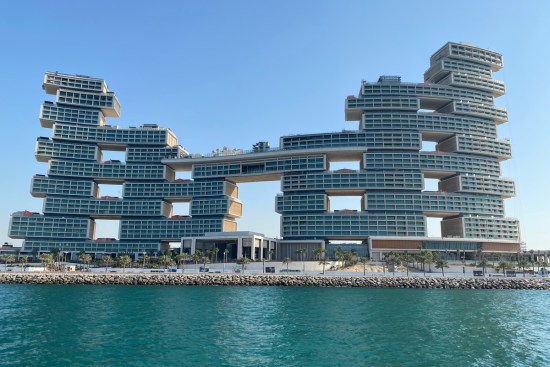 Ever popular among travelers, both for business and leisure from around the world, Dubai sees a steady flow of visitors every single day. The city is therefore home to many luxurious hotels and villas. It’s poised to add yet another feather to its cap with the opening of Atlantis The Royal. The latest addition to Dubai’s booming hospitality sector is set to raise the benchmark in luxury and opulence.

Only recently, Dubai’s $8.7 trillion economic plan was announced which seeks to bring about a massive boost to Dubai’s fortunes. Dubai has also laid down the UAE Tourism Strategy 2031 which has set an ambitious target of the city welcoming 40 million guests to its hotels every year. With the new Strategy, Dubai hopes to see an annual rise of revenues to the tune of $7 million as new investments worth a whopping $27 million are attracted to the city. Atlantis The Royal hopes to cash in on the promising future that beckons Dubai.

The Facilities at Atlantis The Royal

The resort will have 43 stories that shall house as many as 231 apartments of unparalleled luxury. There will be a whopping 693 rooms as well as 102 suites. Guests putting up at the hotel shall get to enjoy spectacular views of the Arabian Sea and the Palm Island from every room. The lobby bar shall have a tank with 2,000 jellyfish as the centerpiece. The hotel welcoming area shall also have three more aquariums.

Guests at the hotel can have a refreshing swim at any of the 90 swimming pools including the rooftop pool on the 22nd floor, the Infinity Pool which shall mesmerize the guests suspended at a height of 90 meters above the ground.

The Restaurants and the Nightlife

Guests at Atlantis The Royal can dig into culinary delights from every corner of the world without having to step out. Celebrity chefs shall prepare exotic dishes at its five restaurants with Heston Blumenthal serving British cuisine, Jose Andres serving Spanish, Ariana Bundy cooking Persian delicacies, Gaston Acurio presenting Peruvian food and last but not the least, Costa Spiliadis working his magic at Mediterranean cuisine by the Palm Jumeirah.

The 22nd and the 23rd floors shall have a late-night restaurant, Ling Ling serving delectable Cantonese cuisine. One can enjoy the food while enjoying the beautiful scenery across many outdoor terraces overlooking the pool. The 22nd floor shall have a 90-meter-long Skypool, an extension of an outdoor entertainment experience—the Cloud 22. It shall also have VIP cabanas featuring private plunge pools, a head-shaped glittering booth for a DJ, and a swim-up bar as well where guests can pamper themselves in luxury.

Atlantis The Royal is poised to give its guests the time of their lives as they party into the night while admiring exotic views of the stunning Dubai skyline.

As Dubai prepares to welcome the newest feather in its cap, Atlantis The Royal, it calls for a grand celebration. The people behind Atlantis The Royal are gearing up to deliver a gala opening ceremony that has been the talk of the town for some time now. It looks like the city won’t be disappointed, what with a grand fireworks ceremony planned for the special occasion.

What’s more, Beyonce will be performing live at the opening ceremony in what will be her first concert after a gap of five years before a select audience. She has been paid as much as $24 million for performing here. It shows how the organizers are leaving no stone unturned to make it a night to remember.

The popular DJ trio that gave us hits like Save the World, Don’t You Worry Child, and Moth to a Flame has also been invited to perform at the opening ceremony. They performed in the UAE the last time in November 2022 at the Formula 1 after-race concert. Dubai waits with bated breath for what promises to be an unforgettable spectacle.

Atlantis The Royal is all set to open its doors to guests on the 10th of February. This USD 1.4 billion ultra-luxurious hotel is poised to raise the bar as the world’s ultimate experiential resort. With each passing day, the expectations keep rising as does the anticipation. After all, the opening of Atlantis The Royal is no less than a so long-considered unthinkable project coming true.